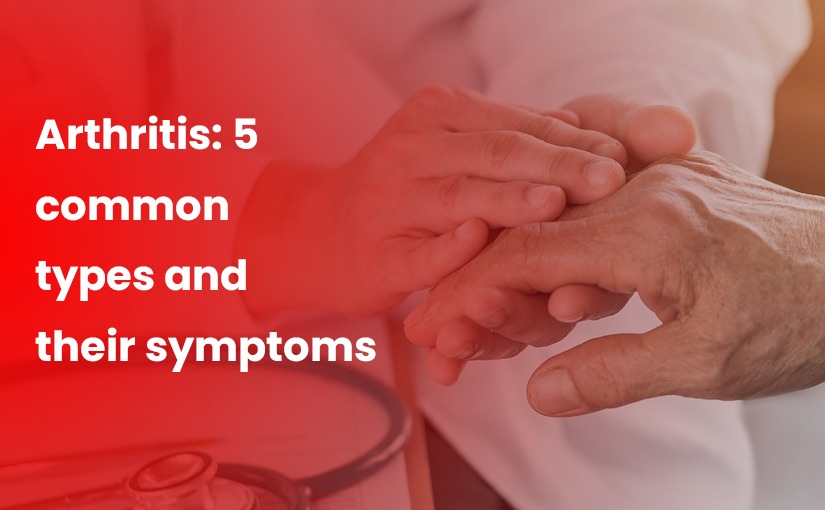 Arthritis is a common problem engulfing a large population of all ages, sex and races worldwide. It is commonly understood as one disease that is related to joint pain but the fact is it is not a single disease. We have arthritis and related diseases of more than 100 types. This common orthopaedic condition can show symptoms ranging from mild to severe. If this common disease is not treated timely, it can cause permanent joint changes that may be visible through naked eyes or can be seen through X-rays. These diseases also affect our heart, lungs, kidneys and eyes.
Kalpit Hospital, a multispeciality hospital in Khalilabad, Uttar Pradesh has a special orthopaedic department that treats all types of arthritis. Through this blog, we also strive to make people understand the nature of this disease that can be too problematic.

5 types of arthritis and their symptoms

Osteoarthritis
This is one of the most common types of arthritis that is caused when the protective cartilage or cushioning at the end of bones wears down with the passage of time. Thus, it is a common effect of ageing but it can also be caused due to joint injuries or obesity. It mostly affects the joints of the knees, hip, feet and spine. Here, the joints hurt due to damaged cartilage but you don’t feel sick or get fatigued which is common with other arthritis.

Common symptoms
• You feel pain during rest or walking.
• Your body feels stiffness after rest.
• Morning stiffness that can last for 30 minutes.
• It’s painful combing, gripping things, bending or any such task that involves movement of joints.
• Your joints feel warm, swollen and hard.

Rheumatoid arthritis is an autoimmune disease that attacks joints and other parts causing inflammation and causes severe joint damage. Many people suffering from this type of arthritis get lumps on their skin that is commonly called rheumatoid nodules.

Common Symptoms
• This affects multiple joints at a time. You feel joint pain, stiffness and swelling in hands, wrists, elbow, shoulders, ankles, neck, feet and jaw.
• It shows a symmetrical pattern. For example, if knuckles on your right hand are swollen, your left hand would probably show the same.
• Your body feels morning stiffness that can last for hours. It is accompanied by fatigue and loss of appetite and weight.
The symptoms of this orthopaedic condition can start slowly or suddenly.

Psoriatic arthritis
This type of arthritis generally starts with psoriasis, a condition where the skin gets patchy, raised, red and white areas inflamed areas and the skin also become scaly. Psoriasis also leads to psoriatic arthritis that affects the tips of the elbow and knees or naval, etc. People between the ages of 30 – 50 generally show the first symptoms of the disease but it can also affect children.

Gout
Gout is another common orthopaedic condition that is caused due to the build-up of uric acid crystals in some joints. Commonly it attacks the big toes. The attack of gout may not be very frequent initially but last longer for up to 10 days. However, if left untreated the attacks may grow frequent and can also affect joints and kidneys.

Common symptoms
• You feel intense joint pain that generally starts with the big toe and can move to your ankles, knees, wrists and fingers also.
• You feel discomfort even when the sharp pain has receded.
• Your joints become inflamed, red and tender.
• Your body becomes stiff and you feel hard to move.

Lupus
Lupus is another autoimmune disease that causes joint pain and also affects other organs of your body. It is said that sometimes the immune system instead of attacking viruses or bacteria attacks joints and the organs causing inflammation and pain. It is more common in childbearing women and usually attacks people between the ages of 15 – 44.

Common symptoms
• You have swollen and painful joints.
• It causes fatigue, headaches, mouth sores and rashes.
• It also leads to sun sensitivity.
• Your fingers and toes become blue or white when exposed to cold.
• It causes blood disorders such as anaemia and a low count of white blood cells and platelets.
• Sometimes it also causes chest pain due to the inflammation of the lining of the heart or lungs.

Conclusion
The above mentioned are some of the most common types of arthritis. These orthopaedic conditions can start as common joint pains but if they are not treated, they can be fatal. So, if you observe any of the symptoms, don’t ignore them. You should take medical advice from your doctor. Our Kalpit Hospital, a multispeciality hospital with top-notch facilities have experienced and dedicated doctors who could relieve you of mild to severe joint pains caused due to arthritis.