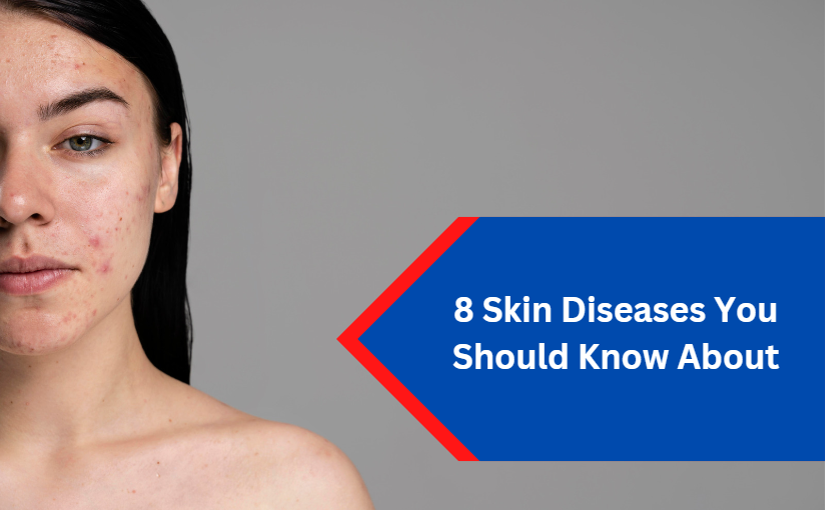 Do you suffer from red, itchy, painful, or inflamed skin?

While certain skin disorders have established origins, such as UV exposure or genetics, others have unknown causes. A few, like ringworm and impetigo, are brought on when a microbe, such as a fungus or certain bacterium, comes into contact with your skin.

According to the dermatologist at Kalpit Hospital in Khalilabad, these ailments are often curable and not life-threatening. He continues by saying that although the majority of skin disorders, at least those that aren’t caused by an infection, can never fully be treated, the majority can be managed.
Read below to know the facts about the 8 most common skin diseases.

1. Ringworm
The “ring” component of its name originates from the fact that it can result in a ring-shaped rash that is red and itchy, according to the Centers for Disease Control and Prevention. Ringworm, also known as “tinea” or “dermatophytosis,” has nothing to do with a worm (CDC). Ringworm isn’t caused by a worm but rather a contagious fungal infection that dwells on the skin, objects, or surfaces like towels, clothing, and bedding.

The CDC states that symptoms, which can include itchy, red, and cracked skin as well as hair loss occasionally, often start to show between 4 and 14 days after coming into contact with the fungus.

According to the Kalpit Hospital, doctors may collect a skin sample to examine under a microscope, though they may also be able to make the diagnosis simply by looking at the patient’s skin. Once ringworm has been identified, it is treated with topical antifungal creams or ointments that can be purchased without a prescription or over-the-counter. The dermatologist at Kalpit Hospital advises using antifungal medications to treat more severe cases.

2. Eczema
Another common skin condition is eczema, which results in dry, itchy skin that has raised, red, scaly patches and occasionally fluid-filled blisters. Typically, the problems manifest on the hands or on “bending” body parts, such as the inside of the elbows and the back of the knees.

According to our dermatologist, certain immune-related genes play a role in the frequent co-occurrence of asthma, hay fever, and eczema and these tend to have allergy symptoms that may be found running in families.

Doctors check the skin and medical history to diagnose eczema because there are no conclusive tests. Since there is no treatment, the objective is to lessen any discomfort and stop flare-ups. According to the Kalpit Hospital, this typically requires figuring out and avoiding triggers, moisturising frequently using fragrance-free products, and using steroid creams.

3. Vitiligo
Vitiligo is a common skin condition, resulting in patches of the skin losing their pigment. With time, the discoloured spots typically enlarge. Any portion of the body’s skin can be affected by the disease. Additionally, the mouth’s inside and hair are both susceptible.

Melanin gives the color of skin and hair. Vitiligo is caused by the death of melanin-producing cells. Vitiligo affects people of all skin tones, however, individuals with dark or ebony skin may notice it more. The condition is neither contagious nor fatal. You can experience stress or self-consciousness as a result.

Vitiligo can affect nearly all parts of the body or just some parts.
Predicting the progression of the loss of melanin is difficult. Without therapy, the patches may occasionally stop developing. However, the skin occasionally regains its colour.

According to our dermatologist, vitiligo has no treatment. Therapy, though, might help your skin restore some of its colours and stop or slow the discoloration process.

Our dermatologist claims that if the skin is already inflamed or irritated from conditions like eczema or bug bites, impetigo is more likely to spread. According to Kalpit Hospital, impetigo is treated with prescription antibiotic cream or lotion, or in extreme situations, with a course of oral antibiotics.

5. Actinic Keratosis
Actinic keratosis is a type of precancerous skin change related to sun exposure and one of the most common reasons people see a dermatologist. Actinic keratosis lesions are flat, scaly, and sometimes rough and appear in places frequently exposed to the sun, such as the face and lips.

Light-skinned people age 50 or older and those who’ve spent a lot of time outdoors without protecting the skin are more prone to getting actinic keratoses.
According to the dermatologist at Kalpit Hospital, the most common treatment includes freezing the lesions (cryotherapy) or applying a topical prescription product.

6. Pityriasis Rosea
The first indication of pityriasis rosea is a sizable round or oval patch termed a herald patch, which is followed by the emergence of numerous oval patches or bumps across the back, breast, and belly. Pityriasis rosea is known as the “Christmas tree rash” because of the location of the skin lesions; the red, scaly patches can resemble sloping branches on the back.

Although the exact aetiology of this skin ailment is unknown, a virus or bacteria may be to blame. According to the dermatologist in Khalilabad, there are breakouts at specific times of the year, and it behaves as a virus would behave.

7. Jock Itch
Jock itch is another skin condition belonging to the tinea, or ringworm and athlete’s foot, family of skin conditions. It typically manifests as red, flaky skin on the buttocks, inner thighs, and other moist parts of the body. According to our dermatologist, this typically affects adults more frequently than children and happens when there is moisture in a warm fold of skin, such as between the inner thighs and the scrotum. He advises that skipping showers or frequent wardrobe changes increases your risk of developing this itch-causing illness.

According to Kalpit Hospital in Khalilabad, it can take weeks or months to go gone if untreated.

8. Contact Dermatitis
Eczema that manifests as irritated skin after coming into contact with something that causes the reaction is known as contact dermatitis. Contact dermatitis can itch and be followed by burning or blistering. Severe cases can have a significant negative influence on a person’s life and make it hard for them to sleep or focus at work or school.

Depending on the severity, topical or systemic medicine can be used to treat and control the rash caused by contact dermatitis. According to the Kalpit Hospital, common treatments include anti-itch lotions, steroid ointments, and oral anti-itch medications like Benadryl.

Conclusion
Besides, there are other skin conditions, which may be infectious or genetic. Kalpit Hospital, the multispecialty hospital in Khalilabad, has a top-notch facility and is capable of treating different diseases effectively.

For the treatment of any ailment, visit Kalpit Hospital.